CELEBRATE THE BURNING OF THE CLOCKS

A trip to London

It’s been seasonably warm in the UK this December (10-15 degrees average each day), so the chances of a white Christmas are pretty slim. It definitely feels more festive with the lights making more impact with the early nights and late sunrises. One nice thing about a winter Christmas is all of the ice skating rinks that pop up. Last Friday we headed into the city for Pete’s Christmas party, but decided just to pop in and then head to the rink near his work at Canary Wharf. It was a different scene from January when the pre Christmas rush had subsided, but it was fun nonetheless and Pete’s skills are improving!

We had a lovely night across the river at the Hilton and then woke up fresh to take Sam sightseeing around London. Even though we’ve been lots of places so far, we hadn’t been to Trafalgar square yet. I’m not sure what I was expecting, but with the sun shining and it being warm and clear, the fountains and statues looked amazing. We then headed for a relax at the pub whilst Sam visited the Churchill War Rooms.
​
Pete and I liked to chalk up as many experiences as possible and getting home certainly was one. We caught the underground from Canada Water to Canary Wharf where we intended to get an overground train to Clapham Junction. Unfortunately we got on the wrong train and had to get off at Surrey Quays where we then got on another wrong train and ended up at West Croydon. Now trams aren’t really a thing in the UK, but they are in Croydon, so we chalked up another London experience and rode the tram from West Croydon to East Croydon station where we were finally on the correct line to get home!

The Burning of the Clocks festival

Last week I was also lucky enough to meet my penpal Nadia. She lives in Rome and ironically came to Melbourne two days after we left for the UK! This time, she was in London for a 3-day visit with her friend and we managed to catch up for dinner in Brighton. It was lovely to finally meet her and a trip to Rome is definitely on the cards!

Since we missed out on bonfire night due to rain and ill health, a while back I decided to Google local festivals and came across the “Burning of the Clocks” in Brighton. In order to celebrate the winter solstice people parade through Brighton carrying paper and wicker lanterns before culminating on the beach where they make a bonfire of the lanterns and burn large posts to represent the passing of the time. They then illuminate a large paper and wicker sun with fire. Of course that is then followed by a massive display of sparklers and fireworks. Pete found us a great viewing point where we could enjoy the music and the display. It was certainly like nothing I’d seen before, but with the winter days being so short and the summer days being so long I can definitely see how pagan people put value into these days and subsequently celebrated them. ​

I’m finally on school holidays now. It’s a 2 and a bit week break, but I’m enjoying every moment of it! We are off to Oxford on Friday for Christmas with friends and then going to Wales for a week to explore. I FINALLY have my passport back, but since the airports are destined to be manic and the rail is being serviced by busses we decided to stick with Wales and are working on the makings of a trip to Scandinavia in the February half term break (I am still chasing those Northern Lights!).

We hope everyone has a safe and Merry Christmas and ring in the New Year in style (we are doing it on an ice-skating rink in Cardiff! Pete is good to me!).
Until 2016,
​
Laura & Pete
xoxoxo 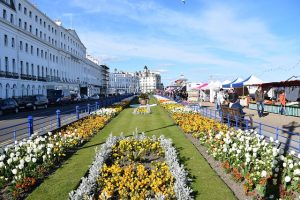 Where to Stay in Eastbourne: The Ultimate Grand Hotel Eastbourne Review