I was looking for an adventure after a big break up. I felt the need to achieve something for myself, so when a TV show came on featuring Nepal, I firmly decided that is where I was going to go. All gung ho, I visited the travel agent that very day to book it in. I was going to hike the Annapurna circuit. It would involve quite a bit of training, but I was ice skating competitively and had friends who did long walks, so I was confident that I would be ok to solo travel in Nepal.

Like all things in life, it didn’t quite turn out how I expected, when I tripped myself over on the ice a week out from our state championships for ice-skating and badly tore the PCL ligament in my knee. Advised that I was in no state to do any sort of hiking anytime soon, I rearranged my trip for Easter and decided on one with a little less walking and a little more sightseeing. I considered two tours. Intrepid and G Adventures were both highly recommended. Due the dates and timing, I went with G Adventures.

OUR GUIDE ON SOLO TRAVEL IN NEPAL

I cried at the airport. My boyfriend Pete, (now my husband) must have thought I was a little crazy. I was just so nervous about travelling to Nepal. All of my bravado at booking had firmly disappeared, and despite knowing that I would have someone waiting for me at the other end, my nerves got the best of me. Luckily Pete knew the right combination of hugs versus pushes towards the boarding gate, so before long I was on my way.

I had been to Asia before, so I knew to expect chaos. A kind man, who I thought was one of the people sent to collect me, offered to carry my bag. First mistake, and $20 later I learnt my first lesson about Nepal! I had heard stories about India, where it wasn’t uncommon to see cows on the road, and this was also true of Nepal.

We shared the road with people, vehicles and animals, and it was more like an organised grid lock, than a free flowing road. Now this was 2013, so the earth quake had not yet happened and the city was in a somewhat normal state. I say that because I noticed that many of the buildings had their fronts demolished and were in the process of being rebuilt.

I was told this was because over the years people had sneakily increased their allotment sizes onto crown land and the government was taking back this land in order to create footpaths and widen roads. For many who had built on this land, it meant they had to demolish and rebuild part of their house. This made the city very dusty.

After around 30 minutes we arrived at Hotel Vajra, which was an absolute haven. It was here I met my room mate Sara, also a teacher from Australia. Our G Adventures tour group turned out only to be a small one with myself, Sara, two other teachers from Aus and two Brits making up a party of 6.

Since I was travelling over the Easter Holidays, it was somewhat inevitable to have 4 teachers in the party, but also comforting to be sharing this journey with likeminded people. It also turned out that Sara had had a bit of a pre trip cry, so I felt a bit better that I wasn’t the only one nervous about setting off to Nepal by myself!

Make sure you allow a few days in the capital of Kathmandu. It’s one of most amazing places to visit in Nepal. Sites such as Bakhtapur square hold incredible history and despite the earth quake a few years back are most definitely worth visiting. A few days in Kathmandu will allow you to get to learn a little more about the food, culture and people of Nepal.

We planned our journey to have time in Kathmandu before and after our trek into the mountains and visit to Chitwan. Make sure you plan for this as you definitely need more than one day in Kathmandu.

Hiking in the Himalayas was the main objective for me. My original tour, the Annapurna Basecamp Trek, would have taken me into alpine areas and to high altitudes. Nursing an injured knee and also a little shorter on time, this revised itinerary stuck to the foothills. For me this was a blessing, as not long into the hike my knee began to hurt terribly and I was limping along behind before long.

The hardest moment was after hiking up and back to a village on day 2 in order to visit a riverside spa. It was definitely worth it, but after all of those steps I was crying in pain.  I found myself, shorts down in a villagers house rubbing liniment into my knee to try and ease the pain. At this point, the guide organised for me to take a local mountainside taxi service so I wouldn’t have to walk quite so far. I was dropped off at the owner’s house (which was a little scary I must say, as I sat in their living room for a good hour or so waiting for this taxi – by myself!) to wait for the next taxi to come.

Once it had arrived, I was lucky enough to get a seat inside where an elderly Nepali man promptly proceeded to rest his head on my shoulder and have a snooze! Whilst I wished that I was walking with the others, taking the local taxi was a unique experience! I was also glad that I had opted for a trip with a shorter hike section. My previous trip had included a hike up to Poon Hill, which would have involved a lot more steps and steep inclines!

Despite the others all being faster than me, my amazing guide stayed with me for the parts of the trail that had to be hiked. He kept encouraging me even when I was seriously hobbling! Although the walking was very challenging for me, I was so glad to be doing it. The villages and scenery in the Annapurna foothills is simply stunning and at points I wondered if I had stepped into a fairy tale.

​ The tea houses (guest houses) that we stayed in along the way were very comfortable and offered us excellent views, especially one the first night where we awoke at dawn to witness the sun rising over the peak. It is a sight I will never forget!

By this point I was all hiked out. After a killer massage in Pokhara, a lovely village at the foot of the mountains, I was hobbling a little less and ready to explore the jungle. Here we stayed in small villages nestled in the national park itself. Compared to the hills, it was much more tropical and like a different place altogether. Chitwan is a huge national park and is home to wild tigers and rhinos amongst others. The area of the park that we went to, wasn’t known for tiger spotting, but we were told that if we were lucky we would see rhinos. Chitwan is Asia’s Serengeti.

After a good nights sleep, we bustled into small canoes to cross the river into the main area of the national park. Our safari was to be conducted in a jeep, with all of us girls sitting in an open area at the back.

The jungle itself was very beautiful, but with no animals in site, after about an hour of driving we were starting to lose hope. Luckily for us, around the next corner, we quietly sidled up beside a male and female rhino eating grass in the shrubs. We were all so excited to see these endangered animals in the wild.

​Little did we know that our safari was going to get a lot more exciting! After another 20 minutes or so of driving we came across a female rhino and her calf. Worried for the safety of her baby, the mother charged our jeep and in a cloud of dust, we hightailed it out of there. Luckily our driver had quick reactions and the mother bashed into a tree, or else I hate to think what the outcome may have been!

10 days in Nepal goes too quickly! Before long we were back in the capital. With an extra day on top of the tour, a few of us who didn’t have to fly out decided to have a lazy day and explore the Garden of Dreams, in the centre of town. Created and gifted to the Nepalese people by the Swedes, the garden of dreams is a walled garden featuring cafes, ponds, bridges and green spaces to be enjoyed. Once you enter the gates, it is like stepping back to a bygone era, and is a really beautiful place to relax for the afternoon. It is also quite western in feel, so perhaps a place you can visit for some ‘time out’ if you’re feeling a little overwhelmed by the hustle and bustle of the city.

Nepal is definitely a trip that can be made solo. I joined in on a G Adventures tour called ‘Nepal Adventure‘. These trips are great as they are small group and you can enjoy the best of Nepal without having to try and get around by yourself. Whilst I was quite overwhelmed when departing Australia, by the end of the trip I really wondered why I’d made such a fuss!

​I felt safe and comfortable the whole time, ate well and saw amazing sites that I could only have dreamed of. Nepal is a destination that you become immersed in, and whilst there is still access to wifi etc, you can easily go off grid and use it as a trip to challenge yourself. Alternatively, you can stay in touch with the world, the choice is yours.

If you do want to stay in touch with home, I would recommend relying on wifi, where available. Even in the hills, many of the tea houses offer free wifi (although some what intermittently). I bought a SIM card with the hopes of keeping in touch, but it was such a rigmarole, and so expensive I really had no credit left to do anything after spending $25 AUD to set it up! It was not worth the effort!

Whilst I wouldn’t recommend this trip for someone who wants to ease into travelling alone, other than the initial departure, it was not scary, or nerve wracking at all!

Have you travelled to Nepal solo? I’d love to hear your experiences.

Hua Hin Holidays: Everything you need to know

What to do in Singapore for 3 Days: The Best Guide 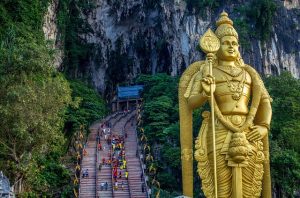