North Leigh Roman Villa is located in the Cotswolds. The nearest township is Combe, which is 4 miles north west of the site. The Cotswolds region lies 2 hours north west of London. It is an area of natural beauty. It is also famous for its ancient market towns and beautiful stone cottages.

Stowe-on-the-Wold and The Slaughters and two notable villages in the area. Larger towns include Cheltenham and Cirencester. North Leigh Roman Villa however dates back to Roman times. Subsequently it offers a unique insight into ancient settlement in the area. Roman sites can be found all over Britain. The Cotswolds are no exception. North Leigh Roman Villa has been left relatively untouched, unlike many others. After discovery it was excavated. Archaeologists explored the site and when they were finished, they partially recovered the ruins to preserve them.

You will need a car to reach the Roman village, but once you are there the site has plenty of parking. The ruins are free to enter. They are open during daylight hours.

Access to the site is via 350metre long dirt road. The pathway gets muddy after rain so make sure to wear walking shoes. The walk down is very scenic. Trees line the walkway and in parts they form a canopy. The fences are stone and are beautifully weathered which is typical of this region.

The ruins are the remains of a wealth Roman’s villa. They were built in either the first or second century. Additionally remnants of pre iron age artefacts have been found on the site. At its peak the villa included 4 bath suites, 16 mosaic floors, and 11 rooms with underfloor heating.

The visible ruins formed part of a courtyard villa. You can also see evidence of hypocaust heating . This style of heating was notably used in the town of Bath. Well preserved examples of this type of heating can be found in the steam bath ruins. Hypocaustic heating made steam rooms and bathing in warm water possible. It also utilised the warm water to heat the flooring. An essential feature in a stone house over winter.

The villa was added to and extended over the years. Nobility, workers and farm animals were all accommodated. Of all of the Roman sites in Britain, North Leigh Villa is known for its beautiful floors. Intricate mosaic tiles covered the floors. Fortunately one area remains intact and is viewable at the site. 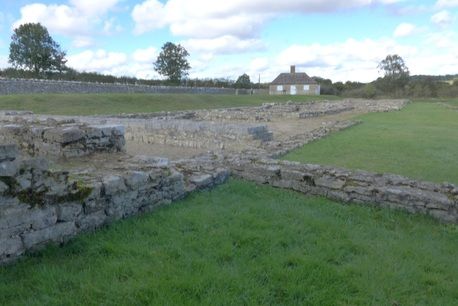 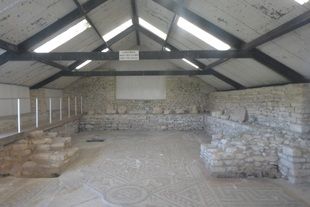 From the sky mounds reveal evidence of further buildings. Unfortunately these no longer exist today.  To ensure its preservation, much of the site was reburied after excavation. Most of the perimeter walls is still visible as is the courtyard entrance.

Archaeologists believe that the ruins to the right of this photo contained farm animals and equipment to supply the villa. The site still remains a mystery, with only very little known about its history.

How long should I allow?

Allow 45minutes to 1 hour for your visit. This includes time to walk to and from the car park. The ruins span around 2 acres of land, so there is plenty to look at if you enjoy archaeology.

In fact the site is well interpreted. There are a number of sign posts explaining what buildings the ruins used to be and telling the history of the site. Additionally a small hut houses several rooms covered in the original mosaic tiles. North Leigh Roman Villa is an fantastic example of Roman sites in Britain. Entry is free, the site is easy to explore and it is also well interpreted. It’s a lesser known attraction in the Cotswolds, so it is unlikely to be busy. You may even have the site to yourselves like us.

Finally, this Roman village is an excellent add on to a Cotswolds day trip or weekend away. It’s the perfect chance to stretch your legs and enjoy the beautiful outdoors. In contrast to the small stone filled villages, North Leigh Roman Villa features open expanses and rolling green hills. The views are picturesque and the site makes a nice break from the hustle and bustle of the townships.

Finally the Cotswolds make an incredible day out from London. Be sure to include North Leigh Roman villa to your itinerary! 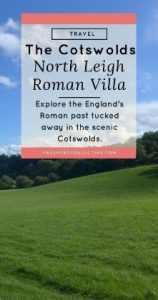 PLANNING A TRIP TO ENGLAND? THESE POSTS ARE FOR YOU.

The Burning of the Clocks Festival: What to see and do

Move to the UK: Alternatives to London

A Guide to the Best Cathedrals in England 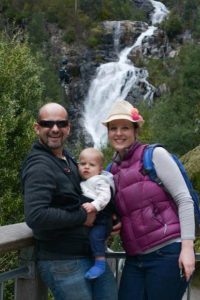