When it comes to attractions in the Melbourne CBD, there’s none quite as immersive as exploring Melbourne’s laneways. Walking tours in Melbourne are a fantastic way of seeing the city and if you undertake a guided tour your visit to Melbourne’s laneways will be steeped with history, fantastic architecture and you’ll find out a few interesting facts even locals don’t know about their own city.

The laneways of Melbourne are prolific… there’s well over 700 of them and they all have their own unique charm. In addition to the laneways, Melbourne arcades display some of the best victorian era architecture and are a fantastic place to wander through and do a spot of shopping. 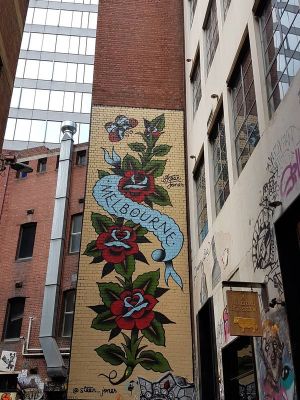 Melbourne laneway tours involve quite a bit of walking, so you’ll want to be wearing comfy shoes. One of the best thing about walking tours in Melbourne, is that they pass by so many cafes and coffee spots. If you’re in a group it can be hard to stop at will, so make sure you bring along a bottle of water and if it’s sunny, a hat. You’ll be out in the open quite a bit and the sun in Melbourne is quite strong.

Additionally, if you’re looking for convenient accommodation, you may want to consider a Melbourne Air BnB for better location to the laneways and for a more unique accommodation style.

When it comes to Melbourne day tours, there is a lot of choice. The best thing about Melbourne laneways and Melbourne arcades is that your initial tour will only last a few hours, so you’ll still have a large portion of the day to explore at your own pace. None of the laneways of Melbourne or Melbourne arcades require an entry fee, so once you’ve discover.

PLAN | Plan to stay in a conveniently located hotel. Read our post on the Holiday Inn Flinders Lane.

The history of Melbourne's Laneways

After the chaos that ensued from building Sydney as expansion required, early town planners decided to build the Melbourne CBD using a grid system. With the larger roads like Collins and Bourke St functioning as main roads for shopping and business and the smaller roads like Little Collins and Little Bourke for housing, warehouses and smaller businesses. In addition to the main and smaller roads, a large network (around 700 hundred) laneways were established as a means to get between the main roads and to service businesses.

It is said that ‘business’ was conducted in the main roads, ‘leisure’ in the smaller roads and ‘pleasure’ in the laneways. Now used for a variety of purposes and featuring a variety of architectural styles, both original and new.  Melbourne laneway tours are very popular and the laneways of Melbourne themselves are a huge drawcard to those visiting Melbourne.

Many of the Melbourne laneways feature restaurants, cafe’s, nightclubs and art installations so it’s no wonder they are the playground of many locals, not too dissimilar to their predecessors! Pubs are one of the big attractions in the Melbourne CBD and of an evening laneways such as Hardware Lane come alive, with people sprawling into the lane, drink in hand, especially over the summer months. When it comes to Melbourne tours, many people think about getting out of the city, when some of the attractions in the Melbourne CBD are well worth a look. Melbourne arcades are often walked through and considered a thoroughfare, however taking a Melbourne laneway tour really gets you stop, look up, look down and appreciate some of Melbourne’s most beautiful architecture.

Linking Bourke and Collins streets, The Royal Arcade is one of the most beautiful Melbourne arcades. Featuring iron fretwork, glorious arched windows and detailed tiled floors, the transparent domed ceiling is glorious when lit up with the afternoon sun.

Constructed in 1870, it is Melbourne’s oldest standing arcade and also a fantastic place to shop and enjoy renaissance revival architecture. Keep your eyes peeled for the famous Gaunt’s clock and statues Gog and Magog who’ve been keeping time since 1892.

Also of note is The Block Arcade. You’ll want to look down and enjoy the detailled mosaic tilled flooring in this arcade. Based on Milan’s Galleria Vittorio Emanuele arcade, The Block arcade is one of the best examples of a 19th century shopping arcade in the world. If you are a lover of food, The Block Arcade is home to Haigh’s Chocolates and the Hopetoun team rooms who are famous for their beautiful parlour and delicious cakes. The stone mounted glass canopy is simply spectacular and casts beautiful shadows throughout the arcade. A passionate knowledgeable guide is critical to a Melbourne laneway tour. They’ll take you on the best route to see the most beautiful and interesting spots in the laneways of Melbourne and be able to tell you stories to bring the history alive.

We started our walking tour at the Westin Hotel before heading into the Chapter House. Like many Melbourne gems, this building is completely unassuming from the road, but with a bit of local knowledge, you’re up the stairs and bearing witness to a beautiful side chapel that once formed part of St Paul’s cathedral. Now available to rent out, its current incarnation is as a high end fashion retailer which lead to an eclectic mix of the old and new.

Heading further up the hill we then visited the iconic Hosier Lane and ACDC Lane which are world famous for their street art. I had visited these lanes before, but it made me realise that I am usually walking through the city with an intent on getting somewhere rather than to enjoy what was around me. It was with this renewed sense of being an explorer in my own city, I was able to look up and around and enjoy the wonderful talent of the street artists featured in the Melbourne laneways.

As well as street art, we also came across a number of oddities, such as shoes strung up on a electricity wire, which lead to much speculation as to how they got there. Is it a case of art, or tipsy revellers playing a joke on their mates?!

The laneways of Melbourne - cobble stones and theatres

Heading further up the hill we then visited the iconic Hosier Lane and ACDC Lane which are world famous for their street art. I had visited these lanes before, but it made me realise that I am usually walking through the city with an intent on getting somewhere rather than to enjoy what was around me. It was with this renewed sense of being an explorer in my own city, I was able to look up and around and enjoy the wonderful talent of the street artists featured in the Melbourne laneways.

As well as street art, we also came across a number of oddities, such as shoes strung up on a electricity wire, which lead to much speculation as to how they got there. Is it a case of art, or tipsy revellers playing a joke on their mates?!

PLAN | You’ll need comfy clothes for this tour. Read our guide to packing for Australia.

Not technically a Melbourne laneway or Melbourne arcade, but well worth a visit is the Crabtree and Evelyn store. The scientific frieze on their ceiling is well worth the stop. To end of Melbourne laneway tour, we took a tram up the hill to the Mitre Tavern on Bank Place which is Melbourne’s oldest pub. Trams are free within the Melbourne CBD, so are a great option to traverse a longer distance when discovering the laneways of Melbourne.

Melburnian’s love a drink, so we finished up the tour with a cold one at the Mitre Tavern, They have seating in the laneway itself, so you can take in the views whilst enjoying your drink or food if you’re hungry.

Whilst I am a local, and my husband has been living in Melbourne for around 5 years, we both got a lot out of exploring the Melbourne laneways. Undertaking a laneway tour, rather than just exploring by ourselves opened our eyes up to many sights that we’d previously just walked past and never noticed. Melbourne is a young city compared to many in the world, but it is one with a unique migrant history and such its diversity is interesting to explore.

The laneways of Melbourne tell the story of the Melbourne gone and the Melbourne now. History is juxtaposed with modern day bars and street art. Small tours like those Freedom Road Travel offer allow you the freedom to stop and start as you please and spend more time in places of interest. They also tailor the tour based on your interests which was unique and made the tour very engaging. Whilst the free walking tours in Melbourne are great, you’d never get this level of flexibility and customisation.

Whilst there are many attractions in the Melbourne CBD vying for your attention, I believe you haven’t really seen Melbourne like a local until you’ve properly explored it’s laneways. Whether you’re visiting Melbourne, or a local, exploring the laneways of Melbourne it is a must do activity.

A point to note, if you’re wondering what to wear in Melbourne, layering is a fantastic option. Comfortable shoes are required, especially since many of the lanes are cobbled. The tour moves in and out of buildings so make sure your layers are easy to remove as you move from the cold to warmth. In the summer, ensure you wear a hat and sun protection to avoid getting burnt.

Whilst were guests of Freedom Road Travel, all opinions are our own. If you are looking to do a laneways tour, we highly recommend doing it with a guide – particularly Margot if they can arrange it for you

Save me for later 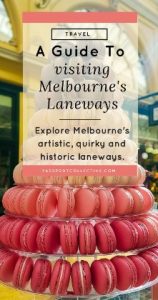 PLANNING A TRIP TO MELBOURNE? THESE POSTS ARE FOR YOU.

The Most Thrilling Day Trip from Melbourne: The Otway Fly

Great Melbourne Activities: The Best Things to do in Werribee

A Local’s Guide to the Best Cherry Blossoms in Melbourne

Where to Celebrate Christmas in Australia

16 thoughts on “A Guide to Visiting Melbourne’s Best Laneways”