Located in the Andalusia region of Spain, Granada is the capital city of the province of Granada. With a colourful history that includes being ruled by the Moors, Muslims and Christians, it is an area with a rich mix of culture and architecture.

Granada is a hub of Spanish- Islamic art, in particular Alhambra,  Generalife  and Albayzin, It is also a city that boasts many parks and gardens. It is a spectacular area to visit on its own, or as a day trip from Seville.

The Alhambra - the buildings

As a revered UNESCO site, The Alhambra is one of the region’s most popular visitor attractions and remnants of its Moorish history. Its original constructions date back to AD889, where it was built upon Roman fortifications. It came into prominence in the mid 13th century when Yusuf I, the Sultan of Granada, converted it into a palace.

It was an important site for the Christian requisition of Spain, and is the site where the leaders of the requisition, Isabella and Ferdinand held court. With the removal of Islamic people and culture from Spain, the site eventually fell into ruin, until it was restored by Napoleon.

The site consists of 5 main areas; the Royal Complex, Court of the Myrtles, Hall of the Ambassadors, Court of the Lions and the fountain and Hall of Abecenjerras. In addition to the main buildings, the site also features ancient gates, walled gardens and sculptured scattered across the site.

The Alhambra - the gardens

The Generalife Gardens, or architects gardens, are a series of open and courtyard gardens within and radiating out from the palace walls. Initially planted in the 1300’s, the gardens have changed significantly over the years, and the current gardens were mostly designed and planted between the 1930s – 1950s.

Despite their lack of authenticity, the gardens are still a wonderful feature of the site and add a lush green pop to the sandy stone walls of the buildings. If you visit in Spring and summer you will also be greeted with a pop of colour from the roses, bougainvilleas, dahlias and crepe myrtles which contrast nicely with the earthy landscape.

How to prepare for visiting on hot days

Due to the high temperatures that Granada experiences during the summer, it is essential that you are well prepared for your visit. The gardens are well shaded with mature trees, however the baking sun means that the air, including any breeze, are still quite warm, so you will be very warm despite the shade.

A broad brimmed hat and sunglasses are essential. A wide brimmed straw hat will provide you with much needed shade and in conjunction with your hat, your sunglasses will ensure that you’re not squinting whilst outdoors.

Water and refreshments can be bought on site, but stores are centred around the main entrance and will require a significant walk to get back to. You will sweat a lot, so make sure that you bring a large bottle of cold water to both drink and splash over yourself to ensure you don’t suffer from heat stroke.

A nifty little invention that many travellers in this area enjoy is a spray bottle with an attached fan. Powered by a small battery, you can spritz yourself with the cool water whilst enjoying the cool breeze from the fan. Definitely an upgrade from a water bottle and fanning yourself.

As you will most likely sweat quite a lot whilst exploring the site, a beach style sunscreen that is water resistant is best. Make sure that you apply it liberally in the cool of your car or bus before heading out as it becomes quite challenging once you warm up!

There are plenty of places to sit and enjoy the shade, however if you have bought tickets that include entry to the palace be warned that you will have to queue, in the sun, for at least 30 minutes, even though you have a designated entry time. The number of people allowed in at a time is limited, and queues can become quite long. Even as a group we were required to queue for around 20 minutes and this is where we most felt the heat. By the time we entered the palace complex we were quite hot and flustered and required some time to cool down before we could take in the beauty of the site.

Lastly, loose breathable fabrics a comfy pair of sandals are essential for exploring this ancient site. You will need to walk on uneven stone surfaces, ascent and descend stairs and your feet will appreciate a supportive pair of shoes.

Whilst visiting in the summer can mean that the weather is baking hot, with a little preparation your visit can be very comfortable and enjoyable. As you exit for the day, we recommend treating yourself to a cool icy pole. Your red faced self will appreciate it! 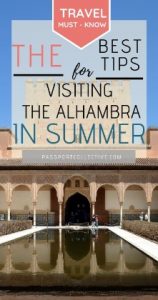 LOVE EUROPE? THESE POSTS ARE FOR YOU.

Why you Should Visit a Danish Summer House

5 Essential Tips You Need to Plan the Ultimate Weekend Citybreak

What to see in Budapest in 2 days

The Best Things to do on a Belgium Weekend Break